Warning: count(): Parameter must be an array or an object that implements Countable in /home/customer/www/evanwashere.com/public_html/wp-content/themes/bluebird-theme/inc/CLM/Options/Field_Registry.php on line 63
 BTS – Elliana Test Shoot – EvanWasHere Photography – NYC Photographer & Studio

One of the amazing modeling agencies I work with here in Manhattan, is the prestigious APM Models.  I called them the other week wanting to test high speed sync (HSS) on my new Phottix Indra 500 lights.  For those of you that don't know, this is a way that lets my camera shoot faster than 1/200th of a second using flash.  Previously, photographers were unable to use external flash lights to do things like over power the sun and shoot moving objects quickly.  With HSS going more mainsteam, this is now possible.  And because my new studio lights are battery powered, I can take them anywhere.

APM sent over Elliana for the test.  We were mostly winging it, so I asked her to bring over a few changes of clothing and to do her own makeup and hair.  Once she got to my photo studio, we quickly went over a game plan and decided on locations and clothing.

Since the day seemed to be extra hot, I wanted to pack light.  Instead of my original plan of bringing 2 lights, I only brought the one.  I also only brought 1 battery, as that had enough juice for the 2-3 hours of shooting time.

Since this was a last minute shoot, I got the help of friends for the assistance.  They did a great job, but I'm missing behind the scenes photos for the first shot of the day 🙁  I will try and paint you a picture and you can also see a glimpse of it in the video below.

For the first shot, I copied something I've been doing for years.  Running into traffic!  Well, it's not as dangerous as it sounds.  Basically, we wait for the light to turn red, then waltz into the cross walk of 3rd Ave, and take a couple photos until the "don't walk" lights start flashing.  We then move back to the sidewalk promptly, never delaying or impeding traffic.  Of course, this means that I have to have all my settings dialed into the camera before we cross, as there is no time for adjustments.  Also, due to the random nature of traffic, you never know what kind of backdrop you will have, as each red light brings you a different collection of cars. 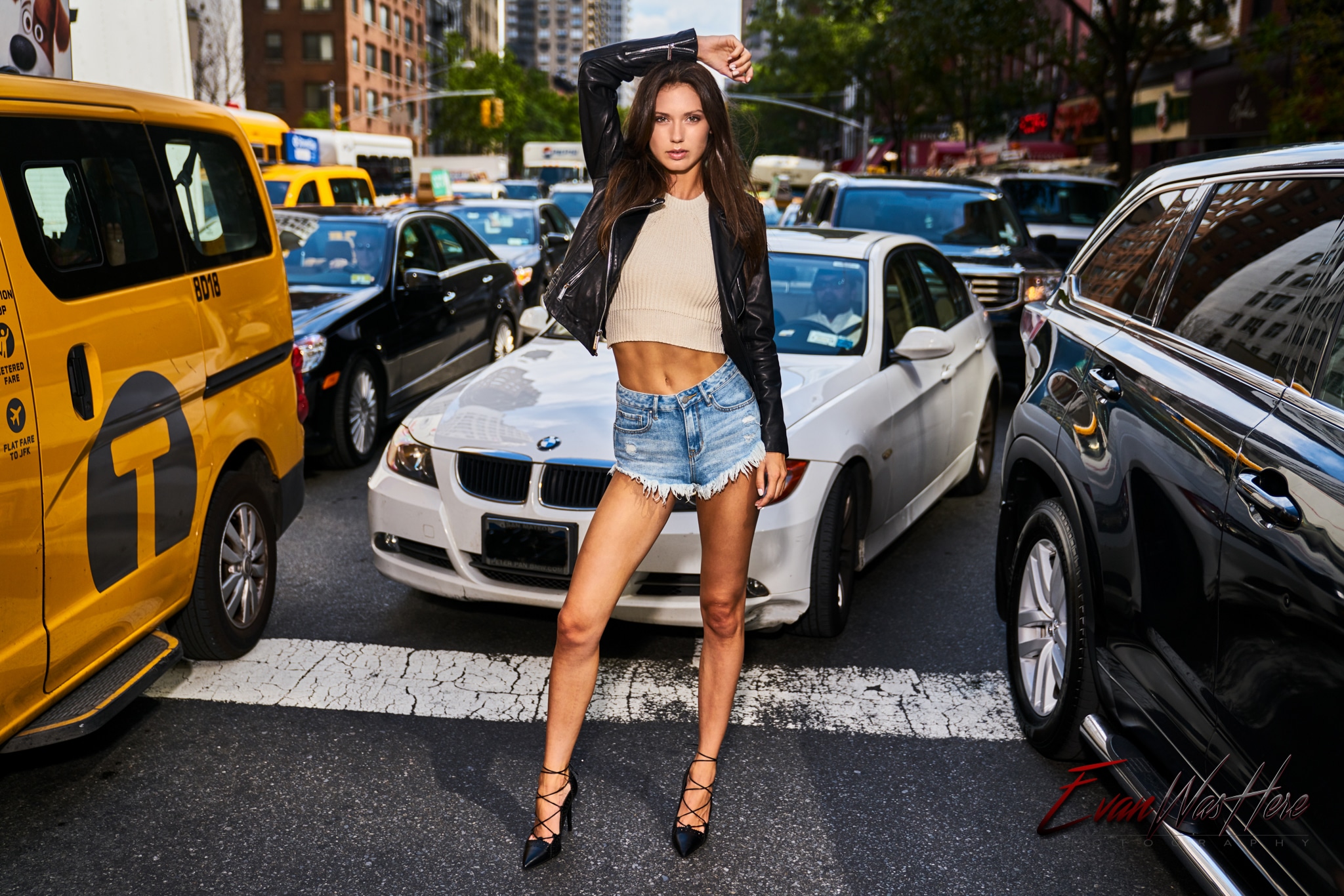 For the next shot, we walked over to Park Avenue.  There is a great spot where the Park Ave Tunnel exits, that has a great backdrop of Grand Central.  We set up shot and I started shooting. 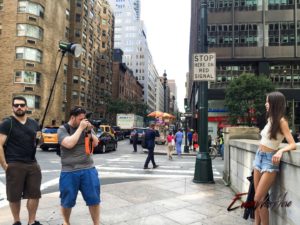 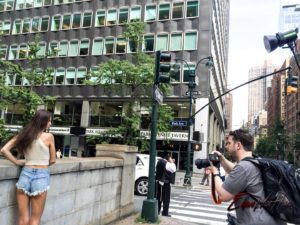 As you can see, using the one flash above me, pointing down, I shot Elliana against the wall.  The results, are spectacular: 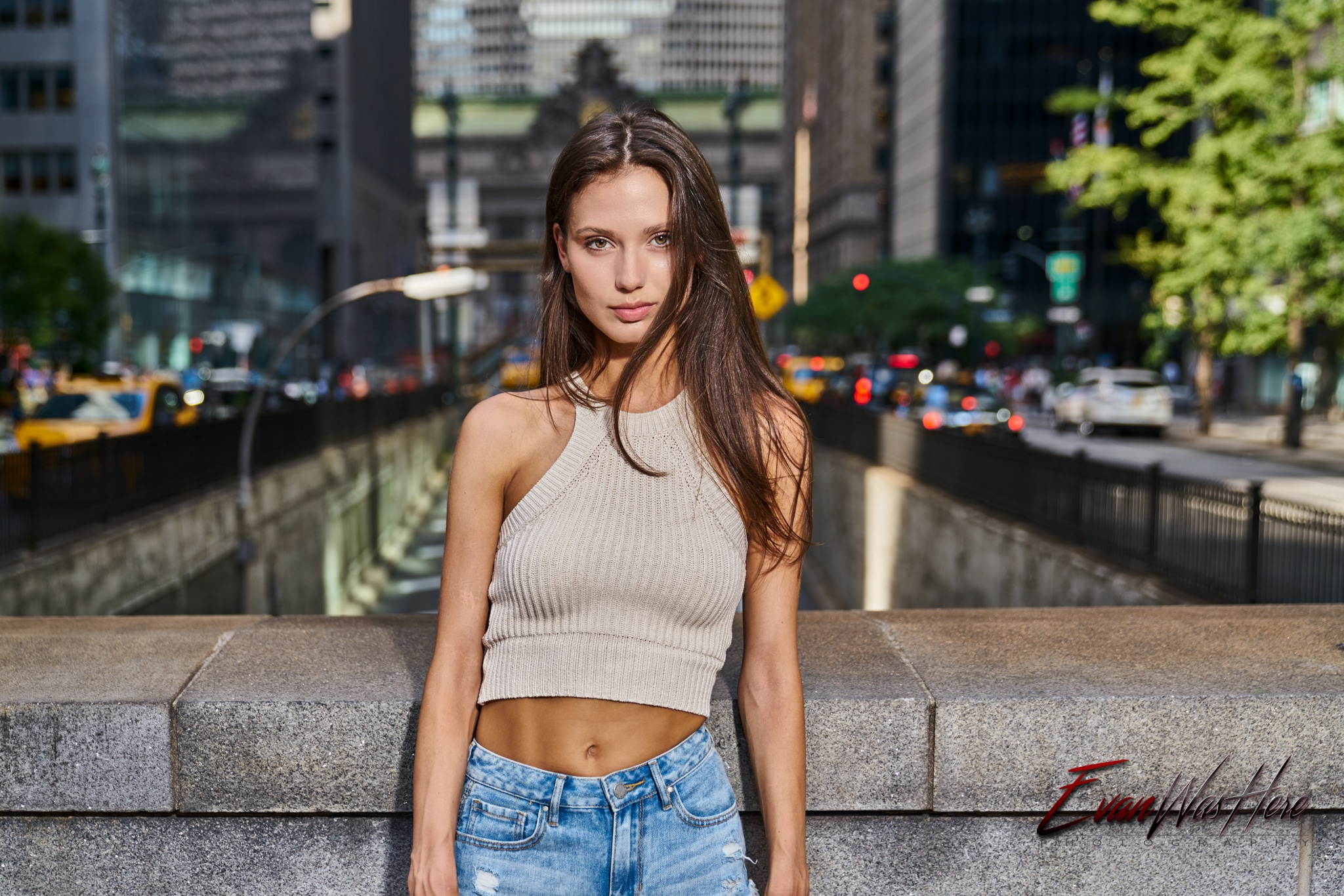 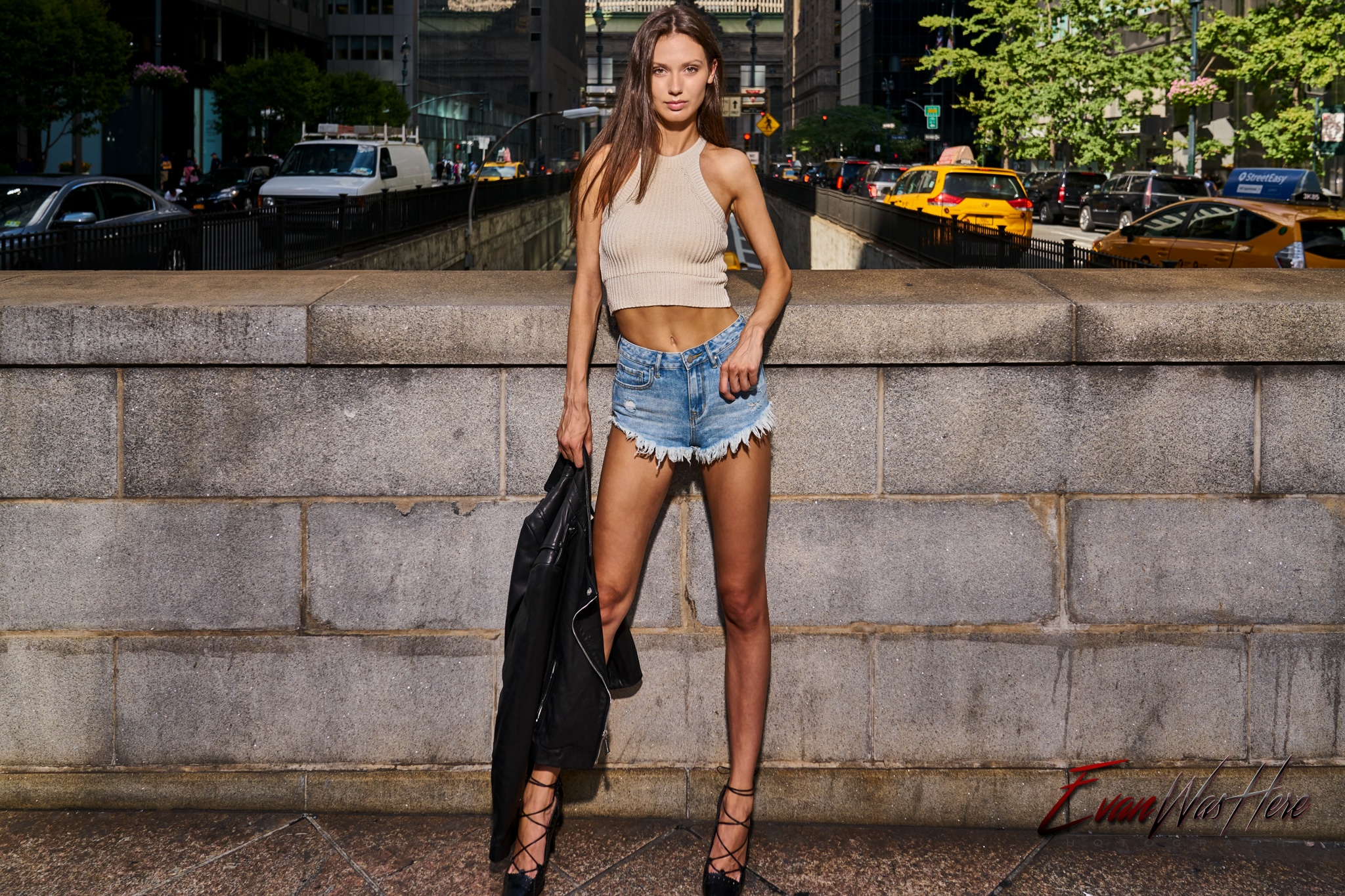 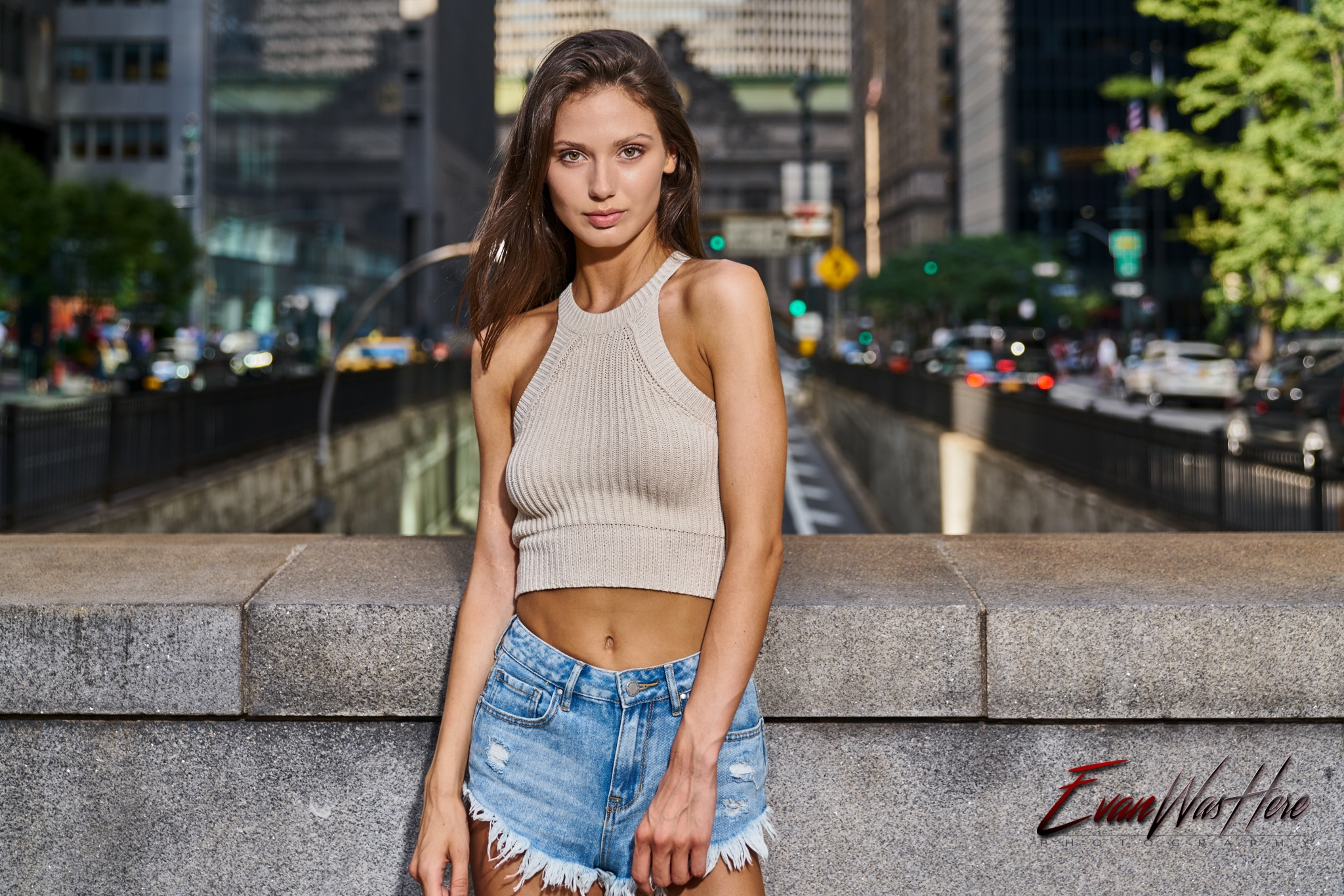 Next was our venture into Central Park.  Since we had some pro gear on us, I first cleared it with the Parks Department, as nothing is worse than getting kicked out by the park police.  With their permission, we started off on rock with the lake behind Elliana, and The Plaza in the backdrop. 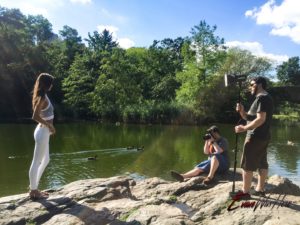 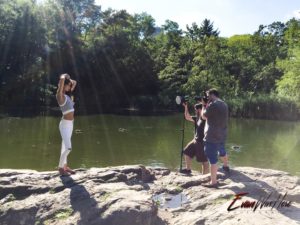 The sun was VERY strong at this point, but mostly on her right, behind her hair.  So I just had to light up her face. 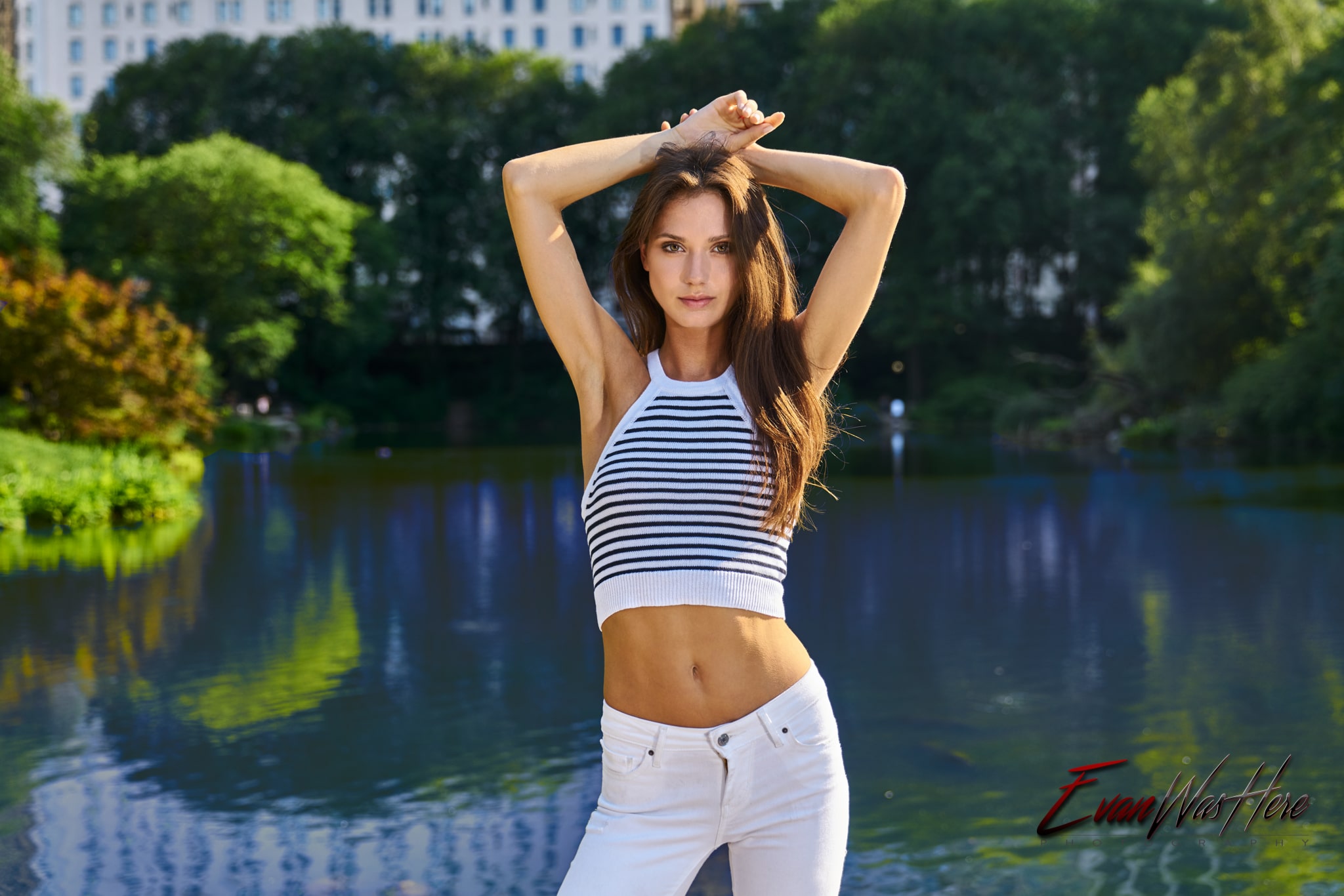 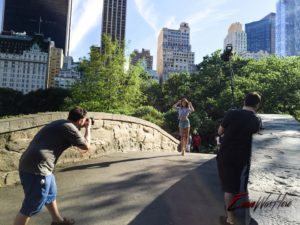 I then removed the random people walking in the backdrop from the photo. 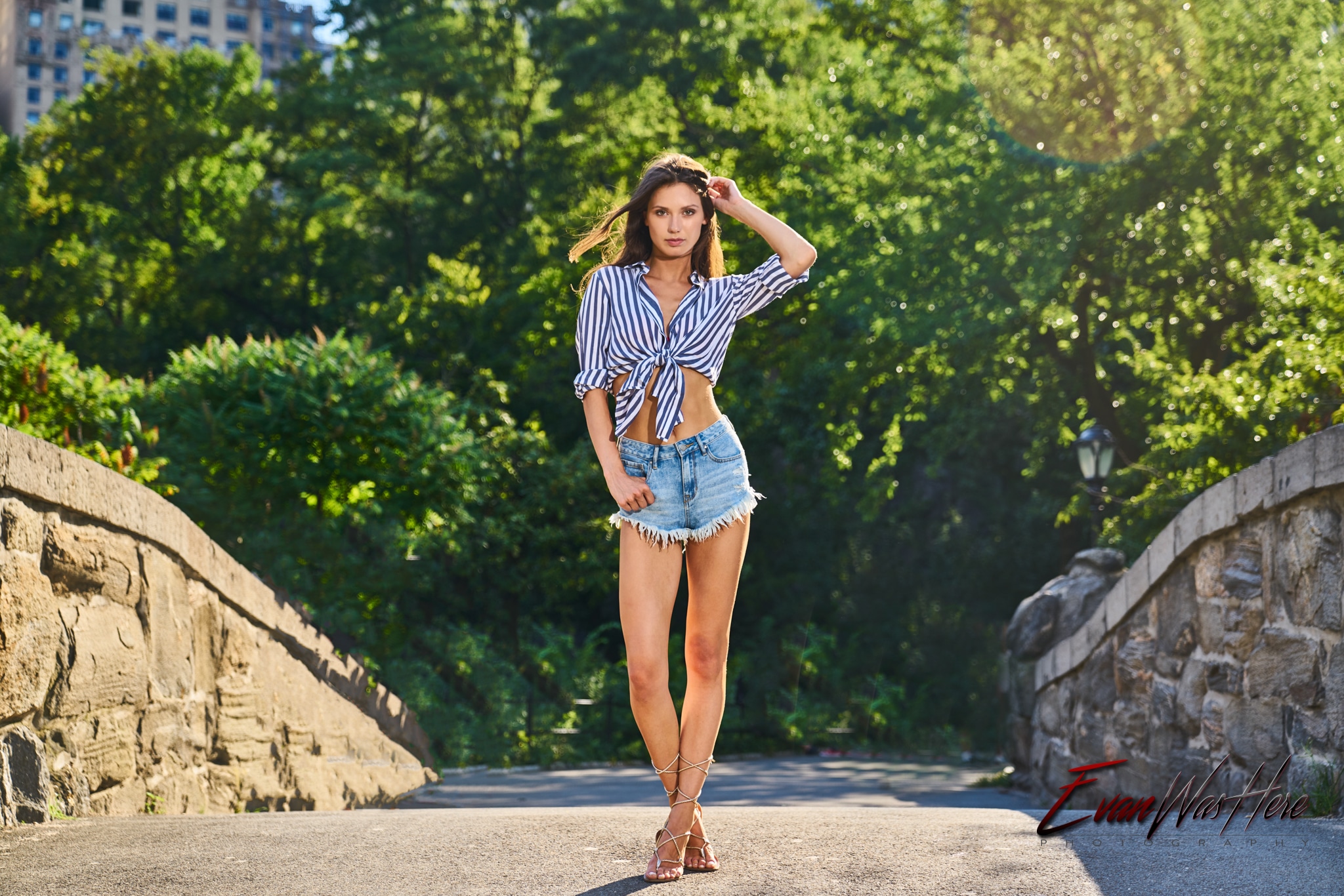 I then had Elliana move to the side of the bridge.  This required some fancy work with the boom pole, holding the light literally over the bridge, so we could get her lit up. 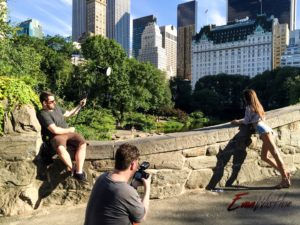 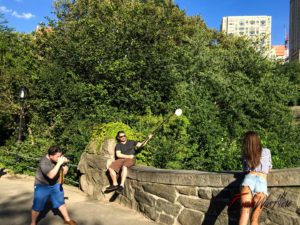 And again, the results are fantastic! 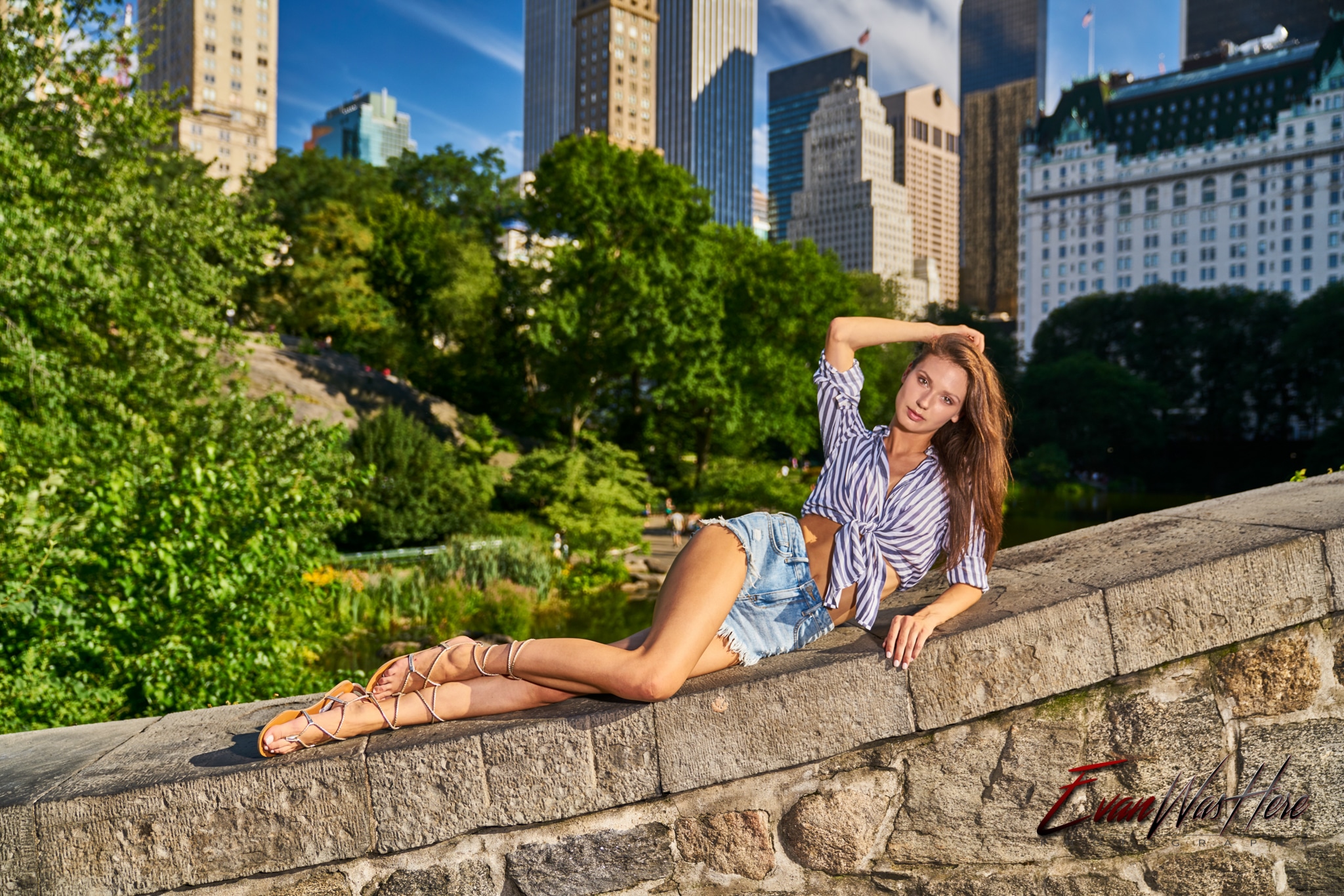 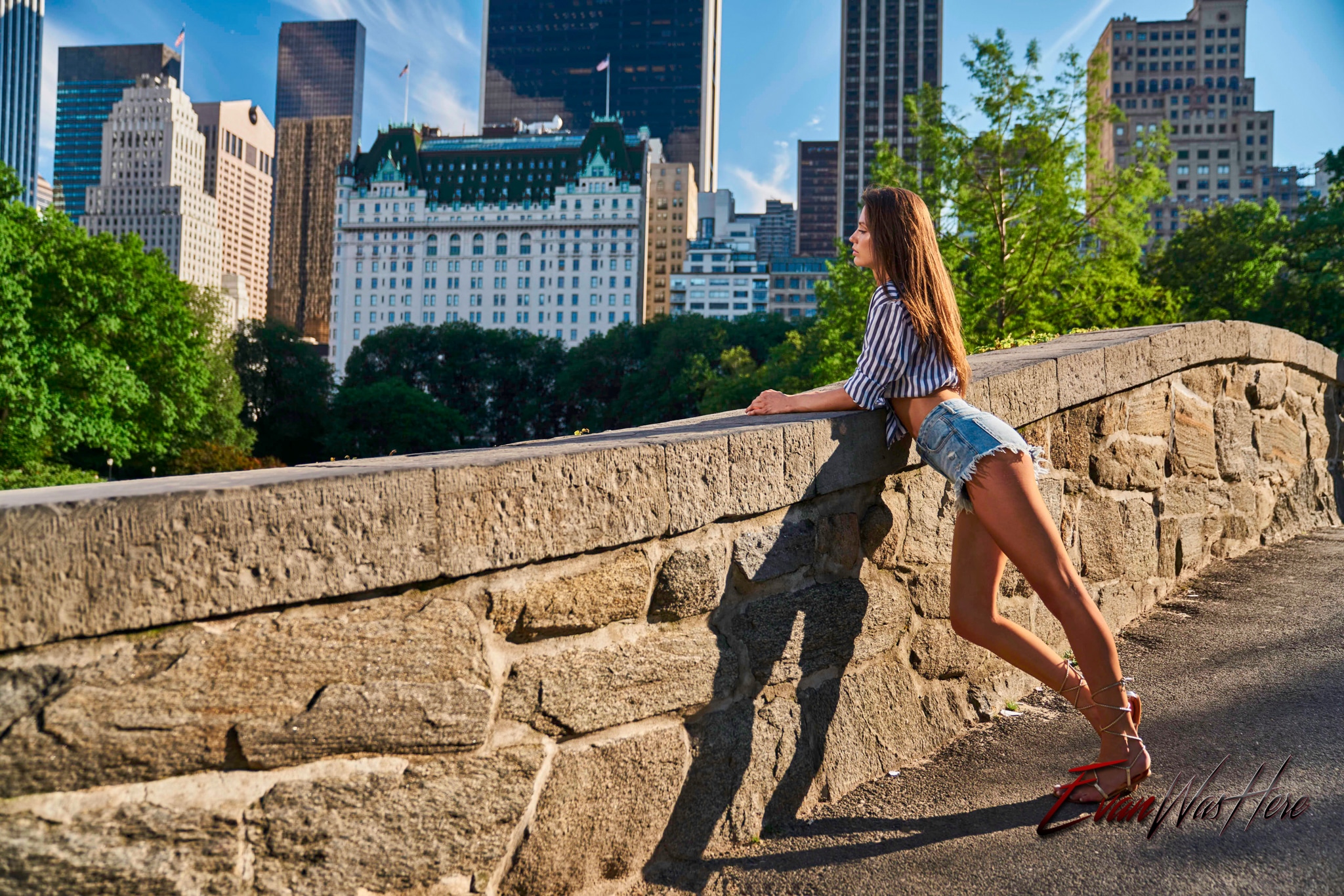 For the final shots of the day, we climbed up a hill and a huge rock that overlooked the park.  The sun was directly behind Elliana, which gave her a beautiful highlight on her hair.  Below you can see the difference the light does.  The image on the left is without flash, the image on the right shows just as the started flash hitting her. 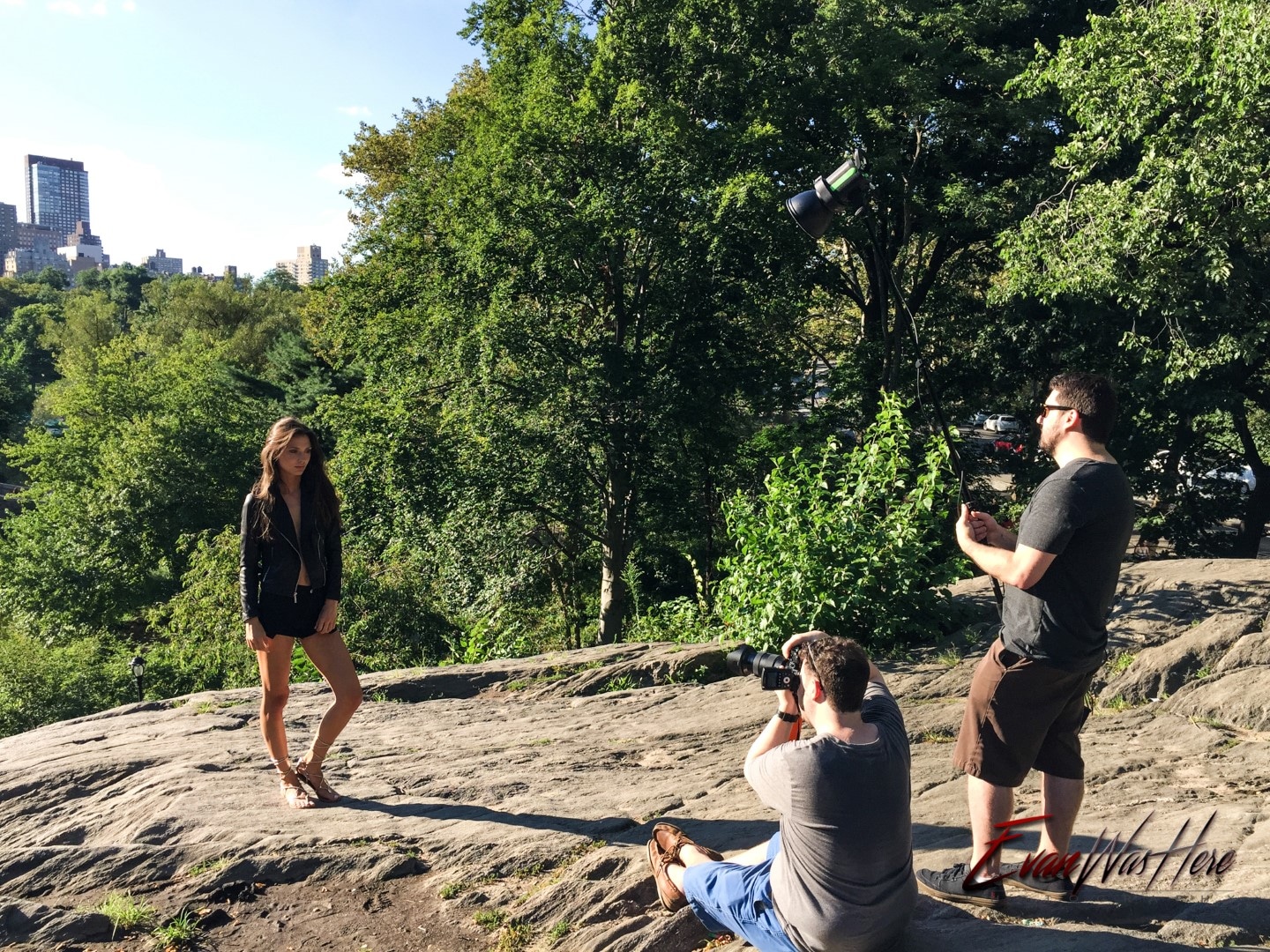 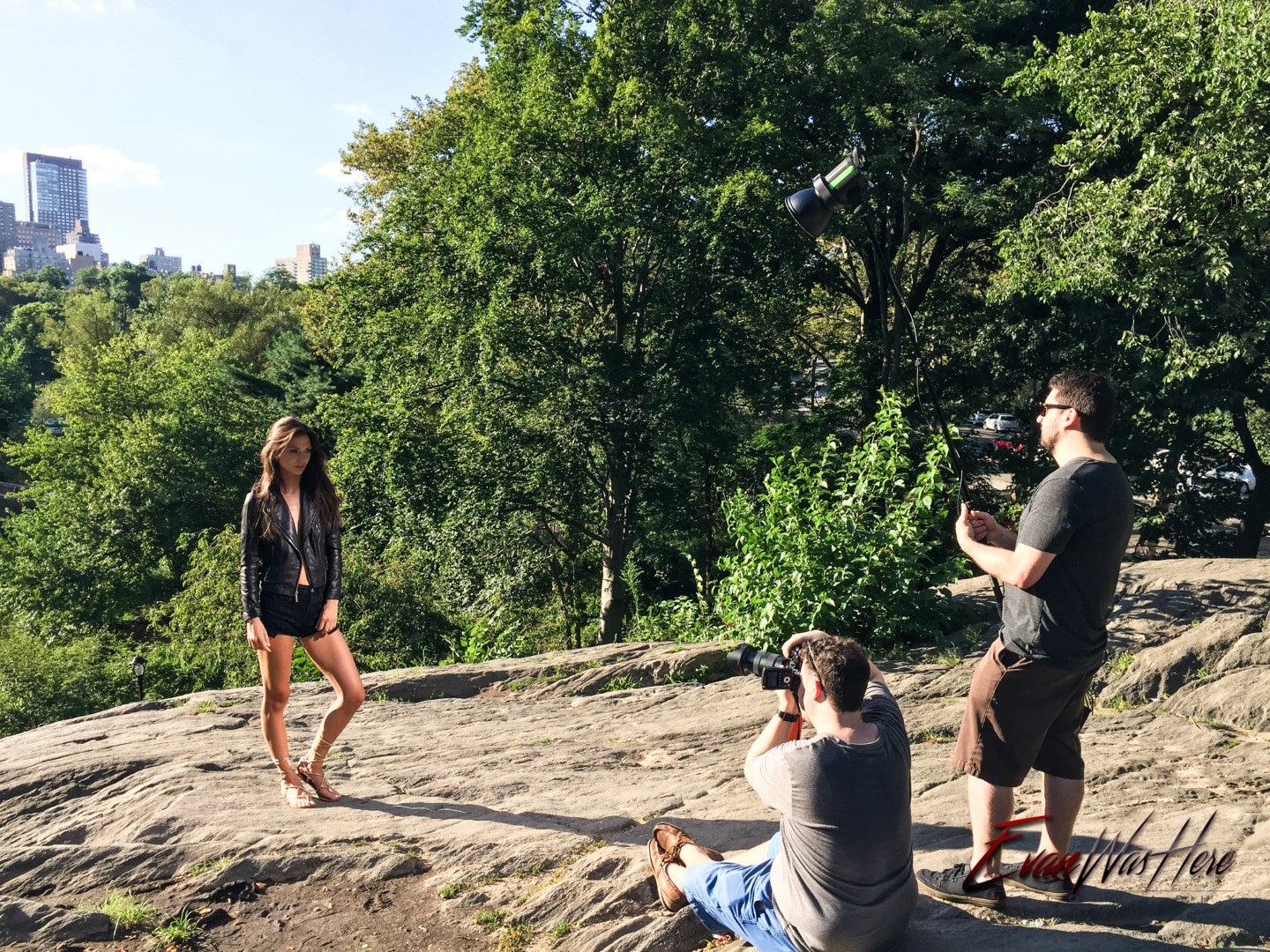 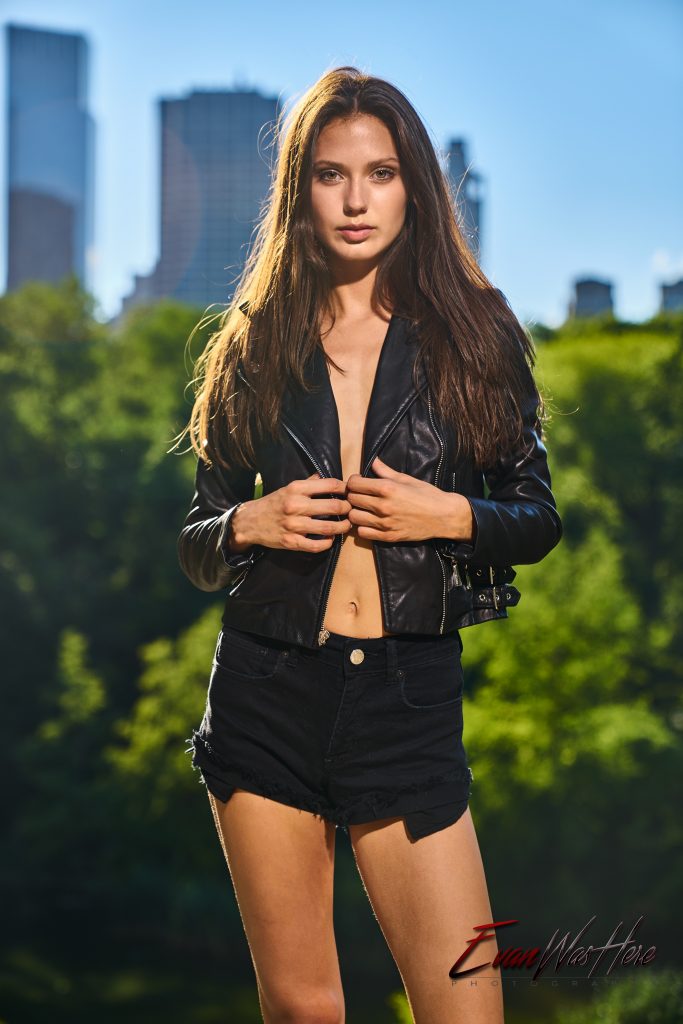 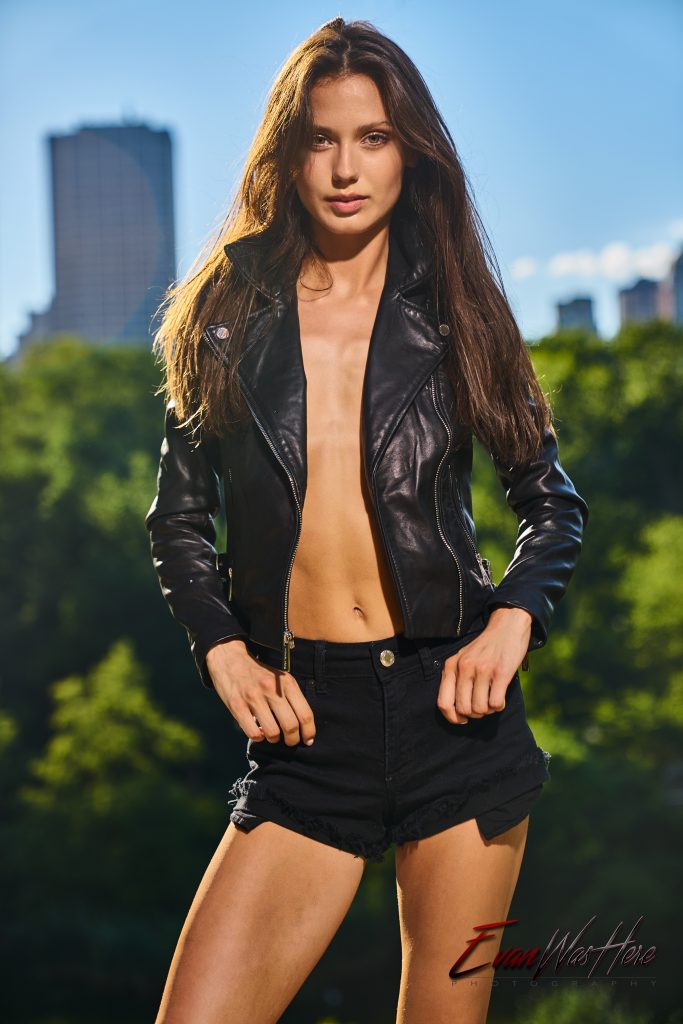 Hope you enjoyed this shoot as much as we did! 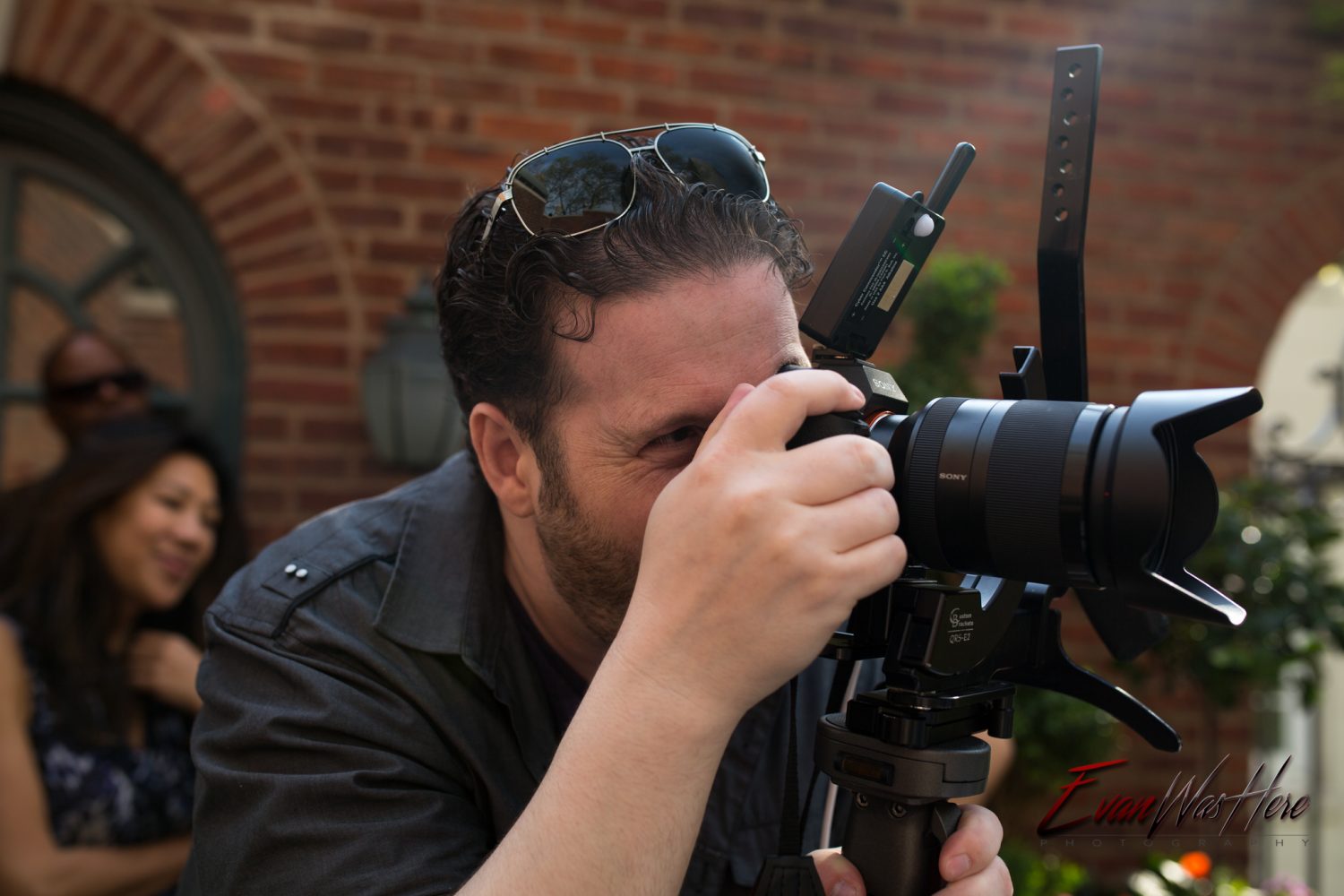 About the photographer: Evan Guttman is the owner of EvanWasHere Photography, based in NYC. Evan’s work is internationally published, with his photos gracing the covers of 8 magazines in 2016.